I lost my voice this past week to a nasty case of strep. But if I’m being honest with myself—and with you—I’ve been struggling to get any words out for a couple of months now. Call it writer’s block or an occupational hazard of being asked to constantly generate content. Either way it’s a privileged crisis, brought on by a lack of confidence, lapse in practice and unwillingness to face the demons attached to blank pages and rough drafts.

I’ve bemoaned my creative struggle to close friends and family, who know how tightly I cling to this part of my identity. They have listened patiently, sent books filled with prompts and promised that the dry spell and anxiety would pass. Still, nothing stirred me. Then, last Wednesday, the lifeless body of a 2-year-old boy washed up on a Turkish beach. And I cannot unsee him. 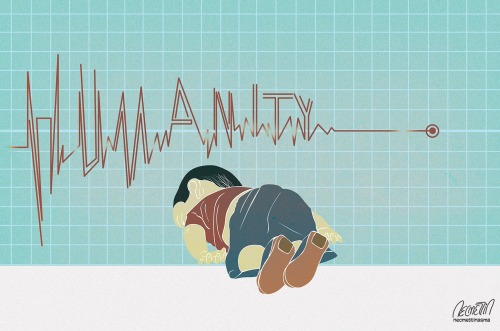 On the same day that Aylan Kurdi’s red shirt, blue pants and tiny shoes showed up on my computer screen, a former editor of mine messaged this piece of writing advice to me: “I always try to find my anger when I lose my voice.” So, here I am—angry and heartbroken and desperate to convey how the greatest refugee crisis since World War II did not begin and certainly won’t end with Aylan’s horrific journey.

As a former school specialist for the International Rescue Committee, I met hundreds of families—just like Aylan’s—who were driven from their homes by war and persecution and stripped of any sense of security or freedom. Some struggled to survive in extremely stressful and chaotic refugee camps for years, waiting to hear if they would ever have the opportunity to rebuild their lives in a country like the United States. Many were separated from partners, parents, siblings and children during the process. All believed that whatever challenges they would face following resettlement (and there are many) paled greatly in comparison to the atrocities they experienced in the places they once called home.

Although the IRC provides newly arrived refugees with access to housing, food, employment, medical attention and language classes during their first months in the U.S., my specific job was to help families enroll their children in the local education system. When I saw a picture of Aylan with his older brother, Galip, I couldn’t help but imagine the pair playing in the IRC office, as their mother and father eagerly asked when the two might be able to start preschool and kindergarten—to learn and laugh and explore the world alongside other children their age, without fear of being decimated inside a school building. Instead, they were buried in Kobani, Syria, this week—a war-torn city they desperately tried to flee. 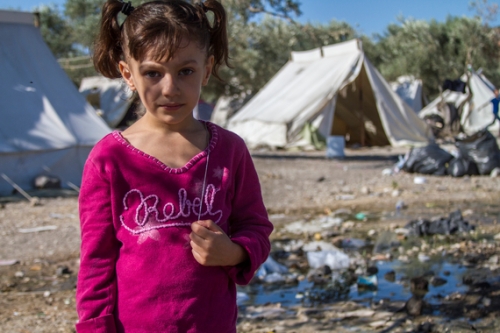 Dana, 5, is one of the many children that make the journey to Greece with their families. They stay in Kara Tepe transit camp, where they wait to eventually be registered and receive their papers to continue their journey into Europe.              Photo: Tyler Jump/IRC

I can only surmise that this was one of many hopes that Abdullah Kurdi had for his own children before boarding that small, overcrowded boat headed for the Greek island of Kos. Policies that restrict safe and legal access to Europe forced him to trust smugglers with the lives of his family. Two accounts of the events that followed—from Abdullah and the photographer who captured the harrowing end to this Syrian family’s journey—will forever echo in my memory, as they both describe the screaming:

“We tried to cling to the boat, but it was deflating. It was dark and everyone was screaming,” Abdullah said. “… That’s why I wasn’t able to make myself heard to my children, my wife.”

“There was nothing to do except taking his photograph,” said Nilufer Demir, the journalist who shot the photo of Aylan on the beach. “I thought this is the only way I can express the scream of his silent body.”

In the book We wish to inform you that tomorrow we will be killed with our families, author Philip Gourevitch shares how, in the hills of Rwanda, a cry for help serves as a conventional distress signal that carries an obligation. A Rwandan man explained the concept to him like this: “The people are living separately together. So there is responsibility. I cry, you cry. You cry, I cry. We all come running, and the one that stays quiet, the one that stays home, must explain. Is he in league with the criminals? Is he a coward? And what would he expect when he cries? This is simple. This is normal. This is community.”

In the days since Aylan’s photograph surfaced on social media, there has been public outcry over the international community’s lack of response to the tragic plight of refugees. Although my shaky voice might only seem repetitive at this point, I would much rather it find strength in a chorus of cries for humanity than never be heard trying to speak up for the world’s most vulnerable people.

The need is overwhelming and the solution isn’t simple, but we cannot ignore confronting this crisis because it’s complicated or because our own touristy beaches haven’t come face-to-face with the human cost of political indifference or indecision… yet. No, we cannot do everything but we can do more. We must come running. How?

When I was a senior in high school, I will never forget studying a poem by William Heyen titled “Riddle.” It explores the idea of who should be considered at fault for The Holocaust by repeatedly asking the question, “Who killed the Jews?” Although one is tempted to dismiss the inquiry at first, when there are obvious individuals to blame, Heyen forces the reader to consider the roles of those who did not directly participate—right down to the folks who “just heard the news.” By the end, it’s clear that the answer to the riddle lies in asking the exact opposite question: “Who didn’t kill the Jews?”

As leaders across the globe either twiddle their thumbs or point fingers in response to the refugee crisis in Europe, my hope is that the rest of us will join hands to turn this collective failure into a joint responsibility. This isn’t simple, but it should be normal. This is community.

3 responses to “Humanity, At Sea”