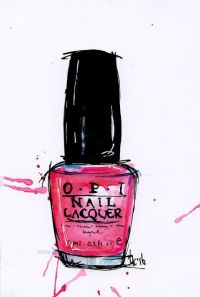 When a 5 ½ year relationship ends, any number of things might be *the* thing that ultimately makes you come unhinged – from that one song on the radio to the shirt your ex accidentally left behind in the closet. But for me, it was a Vietnamese nail technician named Lan.

Like any couple, my partner and I had local spots where we had earned our status as ‘regulars.’ At the nail salon down the street from our apartment, it didn’t matter that they mistakenly and consistently called me Sarah and her Kim—neither of which are our names. Not even close.

What mattered was that the staff there saw us as a package deal.

Every other weekend, like clockwork, they knew to expect us for pedicures, casual gossip and the occasional reminder that no, we were not cousins, sisters, co-workers or roommates. … Technically.

That’s why, when I got dumped, it took me, I don’t know, let’s ballpark… roughly two months, a week and four days to work up the nerve to show my feet there again.

The moment of truth came on a Saturday. In true basic post-breakup form, I had just wrapped up working out at the gym and was feelin’ myself… unusually calm and confident. As I made my way to the salon’s front door, I took a deep breath, mentally struck a power pose and walked in. I needed to know if I could pass this test and actually find a new normal… like everyone kept telling me I would, eventually.

Lan was there. And by the grace of OPI, no other customers. Only one new employee with a big, welcoming smile and little command of English. I add that detail not as a slight, but because it was truly a gift from the universe considering what happened next.

The second Lan greeted me with, “My friend! Where have you been? Where is Kim?” I lost all sense of time, place and dignity. Before I could answer, I let out a sob that landed somewhere between a howl and the last dying breath of a Whoopee Cushion. It was an ugly cry. Visceral.

Unable to pull myself together, I tried to explain how we had broken up by bringing my index fingers together and apart, over and over again. Remarkably, Lan understood my haphazard sign language and translated to his alarmed co-worker what I can only guess was some version of, “It’s OK. I’ve got this. Sarah and I go *way* back.”

Instead of quietly escorting me to the exit, like anyone else would have, he hugged me for longer than you’d expect in this kind of dynamic and said, “She break your heart. I take care of you.”

Of course, I wept.

Normally, my go-to nail polish is ‘Lincoln Park After Dark,’ an almost black shade of purple that makes me feel badass, even when I wear comfortable shoes with orthotics in them. But on this particular day, clearly incapable of making a decision for myself, Lan took the wheel and chose what he called a lucky shade of red. The label said, ‘Ginger’s Revenge.’ I laughed through snot and lowered my feet into the hot whirlpool – ready for my baptism.

Now before I continue, let me acknowledge that I know how basic and bougie this sounds. A white girl having a breakdown while her feet are in a jacuzzi tub and her ass is in a massage chair. Believe me, I am not proud. But here we are. And there I was.

Conversations with Lan usually centered on his family, my gnarly pinkie toe and Donald Trump, but this day was different. Between long stretches of silence, he casually dropped in Zen-like words of comfort and encouragement. Just enough to make sure I was still among the living.

Then, by the time the last coat of nail polish dried—along with my tears—he took my hands and gave me this parting gift, “Go home. Relax. Put some music on. Drink some wine. Maybe dance. Happy feet and the rest will follow.”

I let the sage advice sink in, we hugged one more time, and I reached for my wallet… only to discover I hadn’t brought any cash or credit cards with me.

I apologized profusely and promised I’d be right back, tripping out the door in the flimsy flip flops he had just put on my feet, while yelling back: “My place is just down the street! I’m good for it! I’m so sorry! So sorry…”

While I can’t say for certain that Lan trusted me in that moment, I do know his co-worker was relieved to see this train wreck finally leaving.

Still, determined to prove I wasn’t a complete lost cause, I bought a bottle of red wine to go with the money I owed him and sat down to write Lan a thank you note for his kindness. I signed it Maureen, put Sarah in parentheses, and rushed back to the salon to make my frazzled delivery.

By the time I returned, Lan was already with another customer and the salon had picked up business, so I quietly left the wine and card at his station. As I slipped out the door, I heard one woman laugh and ask with bulging eyes, “What did she have?” It kind of felt like my very own When Harry Met Sally moment… minus the orgasm. Naturally.

Nearly two years have passed since then, along with several therapy sessions and dating app, we’ll say… ‘adventures,’ but I still credit Lan with being the first person to help this relative stranger learn how to put one foot in front of the other again.

Happy feet and the rest will follow. An extra coat of ‘Ginger’s Revenge’ doesn’t hurt, either.

4 responses to “Happy Feet and the Rest Will Follow”